Book Review: Leadership of Public Bureaucracies; The Administrator As Conservator 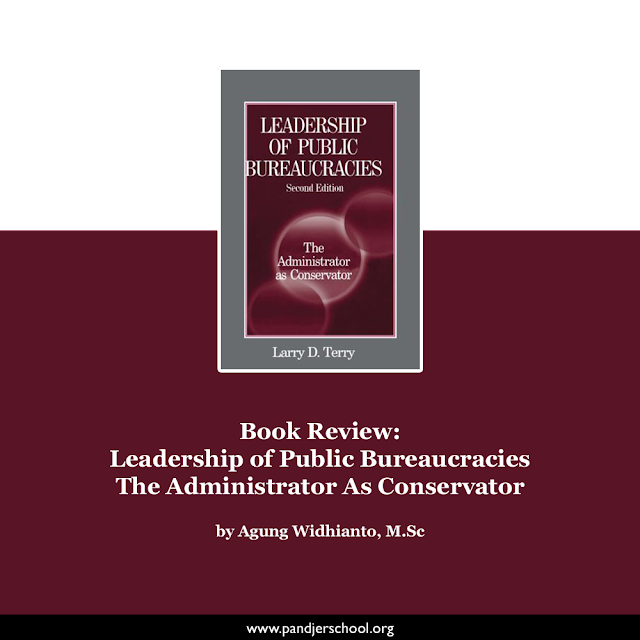 A. My Profoundest Impression
Once I look at leadership concept of this book, it persuades me to undergo such contemplation in regard to power contestation – and trade-off – between political authority and technocratic authority in democratic countries, in which technocratic authority is represented by bureaucracy characterized as fat, complex, and wealthy organizations. Book by Terry does not simply explain the importance and function or bureaucracy in an attempt of public interests’ accomplishment. It – at least in institutional perspective and my wild imagining about public administrators – insists to redefining the legitimacy of career bureaucrats under legitimated subordination of politicians and under pressures of moral obligation, given that they take the oath of office to work for public, not only stakes of certain groups.

The argumentative backbone of this book, as far as I comprehended, is that public administrators have legitimate role and function to protect and maintain administrative work of government (more normative) that coincide with upholding the spirit and living norms of constitution (more constitutive). In concrete, public administrators are often faced dilemmatic situations where they must prove their allegiance and reverence to the politically elected or appointed officials as their line bosses. In contrast, public administrators are morally demanded to defend conformity of formal rules, prowess of populist policies, and verity values in wielding authoritative powers in the form of discretion. At this point, I acquire potent ideas from this book, that is, the public bureaucracies are public ownership, thus the outcomes and impacts should be public oriented. It can be realized when public bureaucracies work beyond political interests (mission attainment), rather, constitutional and sociological interests from which they obtain more durable legitimacy (moral and social commitment). As consequences, the author contends that:

“… It requires balancing the inherent tension in the political system between the need to serve and the need to preserve. Public administrators must be responsive to the demands of political elites, the courts, interest groups, and the citizenry and at the same time must preserve the integrity of public bureaucracies...” (29)

B. Context of this Book
This book is American perspectives, and thus far evidently, conceptualized in the contexts of 1) public restlessness of bureaucracies of becoming authoritarian when wielding added power, 2) the obscurity to treat bureaucracies as business enterprise for the sake of efficiency and expertise centrality, and 3) such scholarly contentious to properly locate bureaucratic function in democratic era. However, I observe that this book rejects the unduly intervention of politicians in bureaucratic work, which often undermining public values, not least constitutional principles. For many reasons, this book agrees that public bureaucracies are critical and substantial for democracy, but possing their primary characteristics - namely stability and permanency – they are often exploited as resplendent tools for politicians (internal) and private actors (external), which in turn potentially violating rules of law.

Hence, this book sheds some light to find a moderate way – inspired by constitutional and institutional approaches – to recuperate the role of public bureaucracies for citizenry and democracy sustainability. In addition, this book is targeted to liberal society, in which to change the status quo is prevalent as long as it is publicly – and conceptually – justified, since the nuance of pragmatism of this book is robust. Further, the sense of conservatism is pervasive to assert the key role of public administrators as the active and determinant actors. Accordingly, for me, the concepts of administrative conservatorship is highly valuable for leadership theory, particularly to rest on public bureaucrats to enact policy discretion for ensuring organizational function and to fortify constitutional principle susceptible to abuse of power.

C. Relation and Contribution to Public Administration
What I can digest from this book is that its strong emphasis on the public bureaucrats, which insofar has received little scholarly attention, given that leadership is predominantly typified by the politician’s performances to make use their power when leading public bureaucracies. Yet, note, this book brings advantageous news for those working in public sectors as career administrative officials. This book introduces – and to some extent substantiate – the legitimate possibility for them to conduct discretion in the face of complexity and rigidity of bureaucracy to be responsible for public interest. This discretion – according this book – is legitimate and necessary for public bureaucrats in upper echelons in response to power-balancing between strategic level led by politicians and operative led by bureaucracy. The crucial idea I have reflected from this book is that leadership is not solely about political leaders, but in mutual complementary, is also about bureaucratic leaders who act as both public interests’ interpreter and implementor who ensconce under constitutions. In other words, as far as bureaucrats work along with constitutional principles and mainstreaming social values, their leadership is versatile and legitimate. In Indonesian context, the leadership concepts of this book can contribute to examine the integrity bureaucracy under political competition, local kleptocracy in policy trade-off, and discretion in policy implementation.