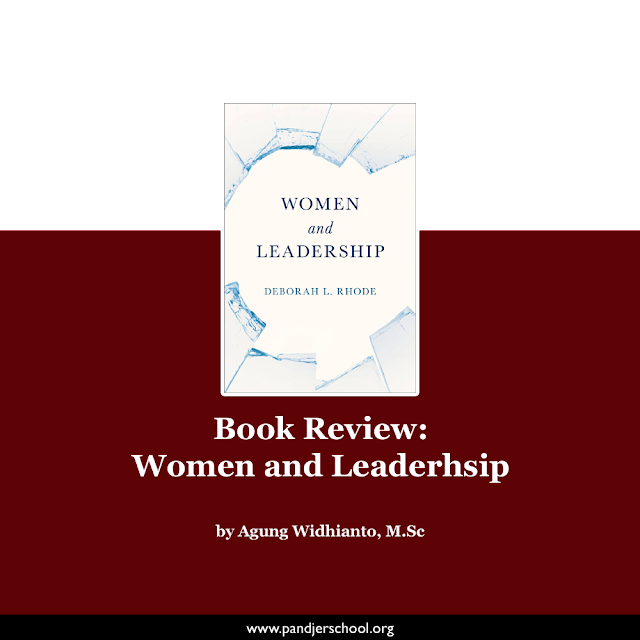 A. Flagrant Note
It is a salutary book which focuses on women rights – and foreseeably their potentials and qualifications – to embolden to address the protracted challenges regarding gender issues in various organizations. This book does not simply rest on the hindrances faced by women to be able to make use their ability and leadership skills which insofar become a matter of some concern. Yet, it challenges the idea and working rules of masculinity in leadership practices which underlie gender and political inequalities in the strategic positions of political, private, legal, academic and board leadership. By the same token, it formulates the plausible solutions to increase women leadership, not just by "number" indicating representation, rather by valuable and seductive roles relevant both for them and workplaces where they work in meaningfully. It is almost conclusive that women leadership is affected by several factors, both individual driven and structural driven, which at the very beginning shaping the initial motives of women to actively run for office. For instance, an imprint of traditional sex-role socialization, familial motivation and responsibilities and women perception to the office which belong to more individual factors. Further, a supply of and demand for female leaders through gender quotas, the structural condition of gender stereotypes, and financial resources to engage in political competition against male candidates which belong to more structural driven. As a valid point, at the individual level, the self-competence of women is prerequisite which is dominantly typified as the ability to cooperate and others-oriented, as “…the successful leadership requires subordinating their own interest to a greater good” (30). Eventually, to make it concrete, at the organizational level, opportunity and solid commitment for female leaders are both required and promising since: “organizations with a commitment to diversity in leadership have access to a broader talent and better mix of skills and perspectives …” (133).

B. Context of this Book
As I observed, this book is contextualized in American social makeups where the idea of feminism embedded and culminated in gender opportunity, equality, and equity which are highly demanding in ubiquitous debates. Intriguingly, this book is likely to superficially posit gender equality – which in turn becomes the basis of women leadership – as a matter of number. In addition, I argue, mainstreaming gender equality requires both female personal qualities and volition of society to accept this anticipated radical change, particularly when dealing with religious matters. However, the surest thing of this book is about how to coalesce individual and organizational strategies to incrementally enabling women in public and private leadership and to meet the ultimate goal: gender equality by "number". Note, since I come from the global South where degree of multiculturalism and interpretation of democracy practices vary, it is reckless to roundly export women leadership opportunities and solutions from this book in patrilineal, tribal, and religious contexts, which may produce structural and cultural shocks. But it should be recognized that the strategies provided by this book is viable to be executed in formal organizations, predominantly private, academia, board and legal sectors. As to public sectors to fully involve women as a key subject juxtaposed with men, I am still doubtful that political willingness of male politicians is enabling since when concerning with election the political makeup is competitive rather than collaborative.

C. Relation and Contribution to Leadership in Public Administration
As yet, a lugubrious note of women underrepresentation in political organizations and public sectors is a matter of common sense. From this book, I extracted several main crucial points. Firstly, the facts that women are an integral part of a society whose problems and solutions which can only be solved by them. Thus, it is reasonable and imperative when the women interests are constructed by themselves through political representation, notably in public sector where public goods and services are at stake. Secondly, relating to organizational effectiveness and performance, the female-dominated traits, such as sense of inspiring, enabling, assisting and empowering are beneficial to complement male-dominated traits, which in turn, generating conformity of needs and satisfaction from female followers as beneficiary of common ends. In doing so, it may increase the legitimacy of public organizations, debunk the standpoint of the public sector in producing gender-bias in policymaking, and ensure the values of impartiality and justice relate to equality of leadership representation and quality of policy outcomes are actively led by women. Thirdly, to some extent I should agree with the importance of women in leading public organizations, but simultaneously I disagree that equality is viewed only by number and representation in person in the work of public organizations, thus organization would be seen as democratic or “gender-friendly”. Rather, women representation in public and politics should be understood as the constitutional rights in which both men and women have the same opportunity, and also as the source of power in electoral contestation and measurement of public trust in public policy. Given this, political motives of both men and women should not be likened, thus the proportion of women in a position of authority cannot be treated to be same since both have dissimilar nature of leadership traits which embody the supply of and demand for female leaders. Finally, all three mentioned main points can be used to explore 1) the lack of women participation in political parties, 2) the organizational reluctance to support women for career development in hierarchical structures, and 3) the female political motivation to run for elective office.