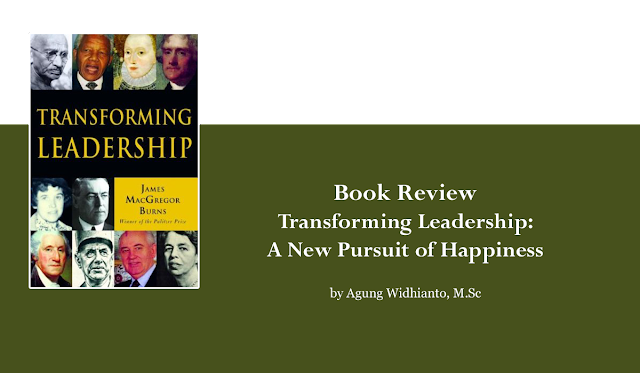 A. Sudden Reaction
First and foremost, I am so delighted to exert my attention reading this thoroughly enjoyed book, mainly bringing me to the historical and classical understanding about leader and leadership, and how it has changed and been changed overtime demanded by contextual sequences. This book sets back my understanding of leadership by emphasizing the most fundamental aspect of why leadership occurs, that according to this book, is set out to achieve what may be termed as ‘the pursuit of happiness’. Indeed, without leadership, a community or even a nation-state is almost non-existent. Leadership is not trivially about who and how power is exercised, as well as not about the transition of throne. Rather, philosophically, this book stresses that the creation of entity – which consequently requires leaders and followers – is to ensure that all people deserve their fundamental rights: liberty, equality, justice and opportunity.

Above all, the final goal is the happiness of both the leaders and their followers which based on public values and tacitly are morally driven through transforming leadership. Interestingly, this book clearly neatly figures out that transformational leaders are those who have genuine roles to envisioning, energizing, and enabling themselves and their followers to collectively create several essential or radical changes, considerably better than earlier, within communities. It is crucial for the leaders to not only enjoy their formal position of power to establish rules and impart orders, yet, they are expected to plan the desired multifaceted aspects of change. Hence, the success of transforming leadership is proven by mutual collective and meaningful empowerment, thus entailing that every individual is a leader in their own roles, responsibilities, and circumstances. As my favourite quote of this book conveys:

“... planning leadership is inevitably collective, combinations whose leaders move and empower followers, who in turn empower and impel their leaders - become leaders themselves - in the complex, far-reaching dynamic of transforming action.” (71)

B. Leadership Context
As I observed, this book is more revolutionary nuanced, which predominantly relies on the heroic stories of people struggle against tyrannical potentates and despotic colonizers, in European and American context. Despite the fruitful lessons are also gained from African and Asian experiences, allegedly, the whole picture about leadership of this book captures the leadership change from authoritarian traits to more democratic traits. It can be seen through the exemplary of war (civil and military) and rebellion characterized the transformation process, in which leadership is inevitable and morally validated from those are disappointed to the status-quo.

To date, I argue that concepts of transforming leadership are beneficial to fathom the nationalism struggle and political referendum in colonialism and authoritarian context. Even so, the core ideas about charismatic leadership and three strands of leadership norms are still versatile today to contextually study social agitation, civil war, trade war and so forth.

C. Connection to Leadership in Public Administration
This book inscribes a set of initial prescriptions that delves into the understanding of leadership and rulership, the original intent of transformation, and expedience of leadership to exercise for power. Albeit this book unspecifically discusses the leadership in governmental organizations, in which public administration becomes a vital characteristic, some separable notions can be utilized to enhance the public service performance (more technocratic) and participatory policymaking (more political). With regard, transforming leadership requires collective and inspirational work, democratic process, and mutual empowerment, thus transformational leaders can ensure that all policy agenda should be rights-based which essentially uphold public values.

Given this, inspired by transformative ideas, leadership in public administration can work for and with the people to determine and fight for better change. However, for instance, I can apply the ideas of transactional and transformational leadership to study government’s policy agenda whether the government acts as duty bearer of citizen-rights fulfilment or acts as a broker to work with the strict procedure at the expense of public values. Or, I can apply the ideas of empowerment to study the nature of the government’s social and economic programs whether evidently empowering communities to be more autonomous for survival or rather creating severe political path-dependency.

D. Contribution to the Leadership Research
This book is applicable to leadership research in several issues, such as leadership style in public sectors, social empowerment led by non-governmental organizations (NGOs), political manifesto campaigned by political candidates and reform of the creation of stateauxiliary institutions. All in all, the major contribution of this book is the acknowledgement of public values embedded in leadership, which more important than analysing the public leaders’ personality (virtue) and performance (ethics).