Book Review: The Powers to Lead 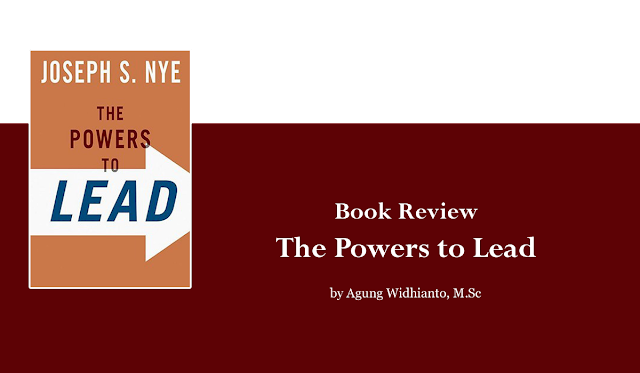 A. Avail Ideas
This book has a clear sight of leadership emphasizing more on actor and power approaches, in which surprisingly, leadership does not simply rest on hard power embedded in formal authority. Rather, leadership involves soft power used as a means of authority regardless with or without formal authority. But in public leadership context, informal power prevails formal power to allegedly account for conflict retardant and centralization of power derived from the bounded-hierarchical position. This state of affairs describes that informal power, particularly charisma, to accentuate or even to perpetuate formal power. Not to renege on the importance of formal power, this book tells me an essential notion of how and why powers can and should be exerted by combining both formal and informal, and by distributing the powers among the followers for the sake of decentralized power to trim the leaders as one of the components of leadership.

Further, the book posits the role of followers to provide sources of power to the leaders, by which both have interdependency to collaborate with, and out of which the leaders act legitimately, and to which collective work to achieve public ends is inevitable. While hard power (I tend to call it as formal power) counts in formal organizations and formal authority is tremendously dominant in public sector, this book says that: “... sometimes those holding the formal positions are not the true leaders in a group... Holding a formal leadership position is like having a fishing license; it does not guarantee you will catch any fish” (19). But still, formal power is the last stronghold, and supposedly the last resort to ensure the accomplishment of organizational goals, either on leaders’ self-interests or on public collective interests. Nonetheless, I should point out other prosperous ideas of charisma as one source of informal power by way of reckoning leaders’ personality and skills, such as tantalizing communication. Since charisma is vague to measure, to some extent, public leaders still need it when in office. But again, this book remains descriptive rather than prescriptive to explain how charisma creation can be studied and replicated. After all, this because of the nature of leadership itself, which according to this book: “... leadership is an art, not a science ...” (xii; 23; 25).

B. Leadership Context
This book is written in post-industrial and democratic contexts, where information disclosure and civil society organizations intertwine with public organizations, which entailing public participation and popular view through media. Particularly, it has been designed to extract and propagate writer’s experiences and insights of been working for U.S. Government. Thus, the idea of democratic values encompassing collectiveness, cooperation, freedom, dialogue, accountability and transparency insofar inspires how the writer discusses leadership by breaking the components and strands down. But as I considered, the intellectual contexts of this book are still prominent in ‘governance’ era, chiefly in developing democracy countries. Nevertheless, note that moral values or standards vary across countries, thus when drawing on the concepts of bad and good leadership, Western perspectives should be adjusted properly to examine the leadership in the Third World.

C. Relations to Leadership in Public Administration
Since I am excited to study leadership in Southeast Asian contexts, where ideas of democratic government are still debated, and valid point of ideal arrangements is being vexing questions, I argue that concepts of transformational and transactional leadership contribute to explain the typology and categorization of authority. More specifically, in the age of regionalization and affliction of public sector competency, the clear concept of soft power is lucrative to understand the power shift from a centralized government to decentralized government, including the relationships between governmental levels and sectors, as well as when dealing with participation. Most importantly, the concept of charismatic leader is appealing to be applied to examine the public sentiment and distrust to the government, by which I argue that charisma derived from both personal characters of the leaders and supportive situations, can provide vivid explanation of why one public sector is publicly reputable, while other is delineated as poor.

Overall, this book put a cornerstone to the study of leadership, which formal and informal power are interlinked, public leaders and followers engender trade-off of the power relationship, and contexts of power used matters to not only discern the cooperation but also the tussles which may emerge. By the same token, the significance to the study of leadership becomes burgeoning given that it is coined with authority by which informal power interacts with formal power, and informal power still encounters leaders’ personality to circumstantially capture the followers’ typology: more inferior or more coequal. All in all, leaders’ charisma is constructed by and represent the public sector’s picture to the outsiders.

D. Contribution to the Leadership Research
As discussed in this book, charismatic and transformational leadership approach (21; 62) is emerging and challenging to withdraw much more scientific explanations of the work of informal politics considerably, particularly in 1) political lobbying behinds policy agendasetting, 2) existence of local strongmen and bossism creating shadow state, and 3) informal role of non-governmental organizations to enable or hinder government’s agenda.