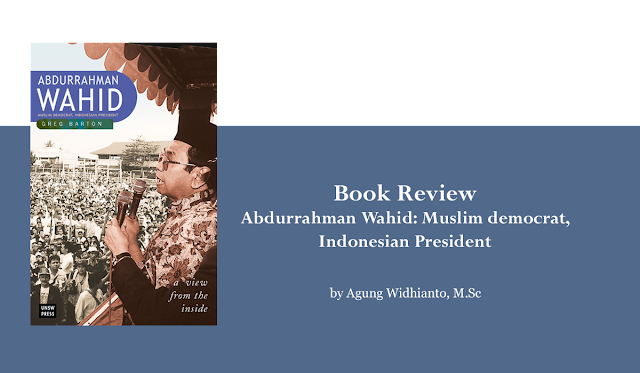 A. Quick Impression
This book is the memoirs of a progressive religious intellectual and uncommon political leader, who served as the fourth president of the Republic of Indonesia during 1999-2001. It is a pleasure to understand how Abdurrahman Wahid, colloquially is named as Gus Dur, was exercising an unpopular style of leadership in public sector which generates a multitude of controversies during political and social crisis. Above all, this book tells the leadership journey of Gus Dur to become a democratic president who promotes democracy and pluralism to maintain the country and people’s unity based on Pancasila: five guiding principles of the state (Pancasila). I found two pieces of quotes on this book attracting me to understand the leadership. The former is that leadership requires open-minded and risk-taking to face dissimilar opinions and critics: “In this Pancasila I’ll defend with my own life. Regardless of its being castrated by the Armed Forces or its being manipulated by the Muslims, or misused by both” (190).

The rest is that the leadership also entail strategic expertise to politically and prudentially articulate and accommodate unwilled situations with realistic and pragmatic decisions.

“Gus Dur possesses superior intelligence. He could have finessed it, and got what he wanted without ruffling any feathers. Such rash behaviour does not bode well for the legacy of a great visionary, a true democrat and a real humanist” (330).

B. Leadership Context
As I concerned, this book is written in a complex transitional political system, critically stressing the emergence and performance of a political leader in the context of highly political instability. I argue that this book is designed to capture thoughts, statements, and decisions of Gus Dur when in office in association with his democratic leadership style, in contrast to authoritarian leadership style led by the Suharto’s New Order. However, it is noteworthy to underscore that several contexts of religious sentiment between Islam (as majority) and non-Islam (as minority), horizontal violence conflicts, the West’s stigma to Indonesian politics after Suharto’s downfall, and residuals of domination of dual function of Armed Forces. In turn, a transitional leadership is provided by this book which is ostensible to be applied in understanding the alteration from authoritarian leadership to democratic leadership, as well as vice versa. In brief, it is sensible to drawn on the concept of leadership from this book, specifically to investigate the leadership reform in more inclined patrimonial and clientelism contexts of bureaucracy. Nevertheless, since this book is written by an Australian researcher, this book presumably targets the West world often curious about the political reform in Indonesia. Also, it targets the Islamic world interested in progressive and liberal Islamic thoughts which reform the mutual relationship between the state and Islam in a secular state.

C. Connection to Leadership in Public Administration
Personally, this book invests a unique understanding of leadership in public sector characterized by complex relationships between politically driven and technocratically driven with poor democratic values to account for public interests. Gus Dur is an intelligent and visionary leader that exemplifies the rare leadership guided by idealistic understandings of national unity through humanist policy, but by realistic decisions that are non-popular and resisted by well-established cultural norms. All in all, leadership is about agree to disagree, which majority of politicians and communities in Indonesia comprehends it as hilarious idea. Moreover, leadership is also about situating multiculturalism as social capital to the existential of the state, and reforming presidency institutions to be more functional and democratic, thus a political leader can be fallible making decisions. It is an opportunity for and rights of the people to openly criticize those decisions on behalf of civilization and modernization of the government and daily politics.

To be more abstract, the leadership concept of this book, which I name it as transitional leadership, elucidates how individual and personality matter to challenge or even change both the system and embedded political cultures. Unfortunately, the legitimacy obtained from institutional factors much more matters, which can explain why leadership which endangers to dominant interests within the system may kick the leader out.

D. Contribution to the Leadership Research
This book is valuable to the prominent research in leadership, particularly to study the importance of pragmatic and progressive leadership than normative and conservative leadership. Further, it can be elaborated with other leadership concepts to study how political leadership challenges and is challenged by a lack of political supports through the absence of cohesive democratic institutions and the existence of notorious opponents reluctant to the change. Ultimately, in concrete, this book is beneficial to study the process of bureaucratic-administrative reform led by a progressive leader but hindered by conservative actors and organs, especially in growing democratic countries.