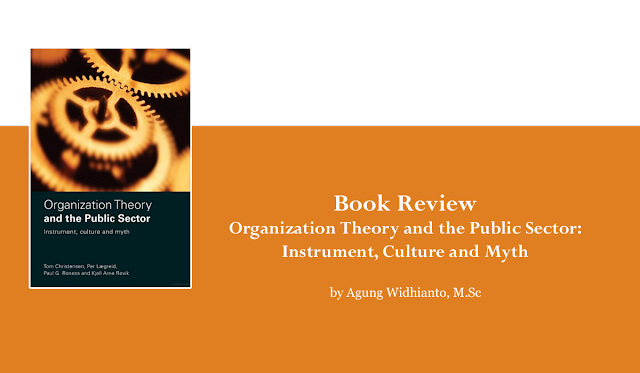 A. Public Leadership Meaning
Gaining a wealth of insights from this book, public leadership has multifaceted meanings derived from distinct theoretical perspectives. Firstly, instrumental perspective tends to comprehend public leadership as a means for leaders to accomplish public goals with what may be regarded as rational calculation (22–23; 34). This perspective is bifurcated. The former is assumed that a public leader is rational and self-interested to exert the authority invested in to hierarchically control the organization (hierarchical variant). However, the rest is assumed that the public leader often deals with incomplete information, dissimilar interests against other actors, and limited resources, thus he/she needs to enact compromises in the form of articulation of interests and negotiations (negotiation-based variant). Secondly, cultural perspective that more emphasizes on the importance of norms, values, and cultures to influence public leadership to run for public interests, chiefly in decision-making (39–41). Given that public leadership requires and is able to create informal norms and values for its existential role for public, it is provided and guided by a set of internal customary features which so-called institutionalized organization. Thirdly, myth perspective which considers public leadership has existing values and norms embedded in the organizations, yet, it needs to adapt with the external environment to elicit public legitimacy and identity, which can be conducted through imitating and imaging (58–59). Ultimately, I argue that instrumental perspective is rational-choice theory-inspired with a highly emphasis on ‘logic of consequences’, whilst the cultural and myth perspectives are clearly new institutionalism-inspired with a highly emphasis on ‘logic of appropriateness’.

B. Important Factors of Public Leadership

Above all, in brief, the book I read is useful to elicit some light of public leadership since it provides gradual learning steps with comprehendible language. Hence, I am more inspired to explore public leadership concepts in more grounded way, building on the discussed concepts of this book.